I woke this morning to a heavy frost outside, the first frost of the Winter in Northern Ireland this year.

I love the frost, it highlights the different aspects of my garden and is truly beautiful.

As I drank my first coffee of the day, I watched the flurry of birds around my feeders. A mixture of playful Finches and Tits and of course the territorial Robin. Throughout Autumn there were very few garden birds spotted around my feeders. During Autumn, berries are extremely abundant and so birds feed on them when available. But now, as the weather turns colder, the berries are gone, the leaves have shed and the earthworms are protected by the hard, frost-bit soil.

So, I urge you to put something out for the birds. They aren’t a fussy lot; they like various nuts, seeds and breadcrumbs. I always make sure to put out Niger Seeds which always attract the Goldfinches.

Trust me, it’s pretty nice to watch them flutter around whilst you have the first coffee of the day.

I began my ascent of Slieve Muck on a beautiful sunny September morning. The mountain has always caught my eye and I have always wanted to walk along this section of the Mourne Wall. I climbed the stile and started to follow the wall and immediately understood why this name was given to the mountain. It is definitely “Mucky” as the hillside is full of water, mud, Moss and Heather. Slieve Muck helps to feed the waters of Spelga Dam which lies directly below it. 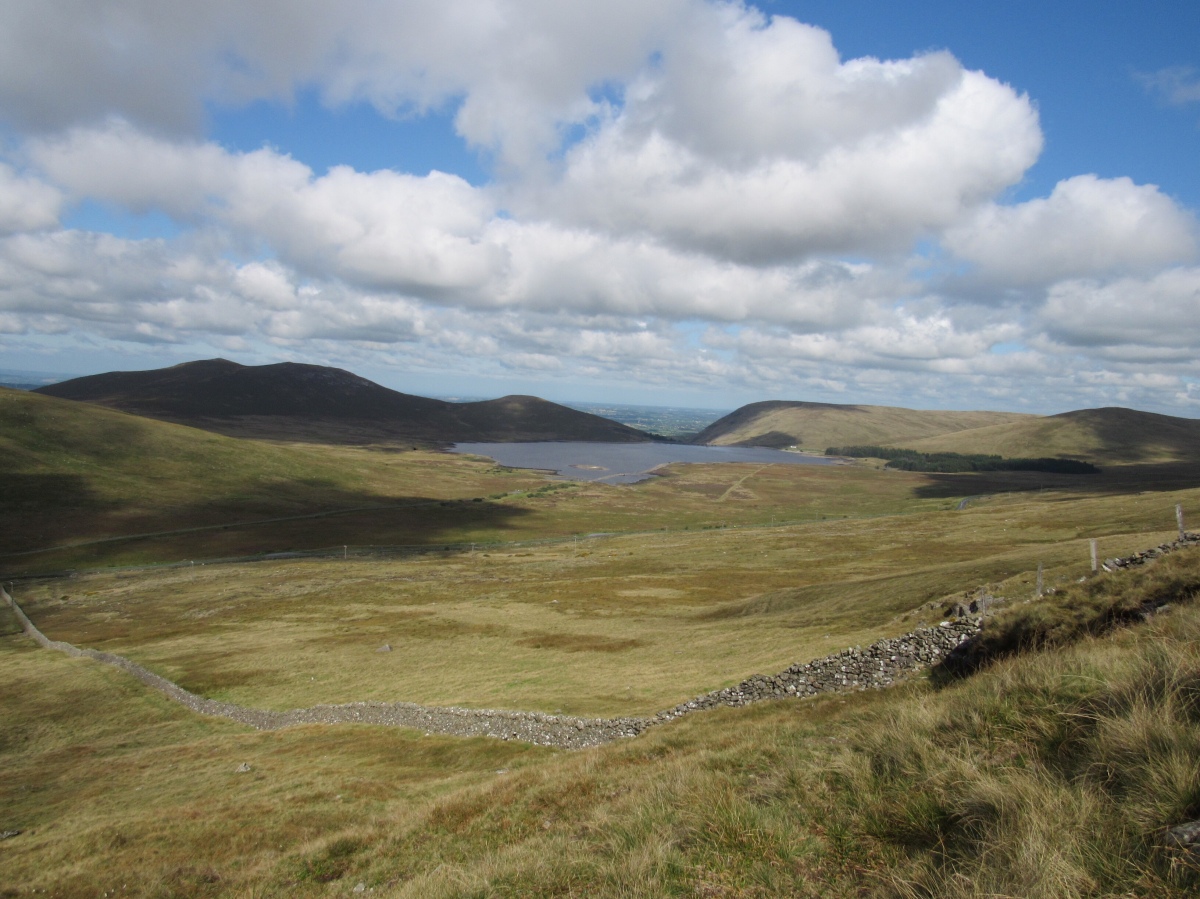 As I walked further, I was intrigued by the sound of running water as t seems to run beneath the stones of the Mourne Wall. There is a lot of outcrop formations showing the underlying geology of the mountain and this explains the surface run-off waters. If souls are narrow between the surface and the underlying rock, the souls will saturate quickly and cause excess waters to flow down the mountain. This water created waterfalls on the most minute scale. With the sun shining down on the mountain, these patches of wet rock glistened and sparkles, and was quite beautiful.

The higher I got, the more I could appreciate the view of Spelga Dam with the old road and bridge still visible. For a while I just stayed there, watching how the shadows of the clouds changed the landscape. I let the winds rush past me. The sound of traffic was starting to fade and all I could hear was the wind and the birds. Suddenly I realised just how many birds there was.

From the bottom of the mountain I had spotted a few large Ravens flying along the summit of the mountain. But I had been distracted by my surroundings and missed the gathering of Ravens that were now circling me. They were making a lot of noise now, as if calling in for more recruits.

Now, I do love birds, but have you ever seen the Alfred Hitchcock movie called The Birds? Well, it was the only thing going through my head at that minute. The gist of the film is a pack of birds that terrorise a town, attacking the people and ultimately pecking them to death. I was aware that I was being a bit dramatic, so I kept on walking as just paid more attention to the birds. I think I counted the birds every few minutes and their numbers kept growing. Some were soaring high above the mountain, some were perched on the wall and others flew behind me. I was determined not to let them deter me from my summit. Then they started to fly closer to me, so close that I could hear the flapping of their wings and that was a bit too close for comfort. Their swooping and circling felt like threats and the higher I climbed the more aggressive they got. So, I called it a day. I turned around and started my descent. Immediately the Ravens began to fly further away from me and their numbers started to dwindle. Their forces were retreating as I was. The calls continued but they were no longer threatening, they now sounded like cackling. I guess they were happy that I had been defeated.

There should be an important rule to follow whilst exploring nature, to back off when you are infringing on wildlife. I was moving closer to their roost, their habitat and their home, so the Ravens were simply defending their territory and it is my responsibility to respect that. I will venture back to this area and try to reach the summit but on this day, the Ravens were ruling the roost.